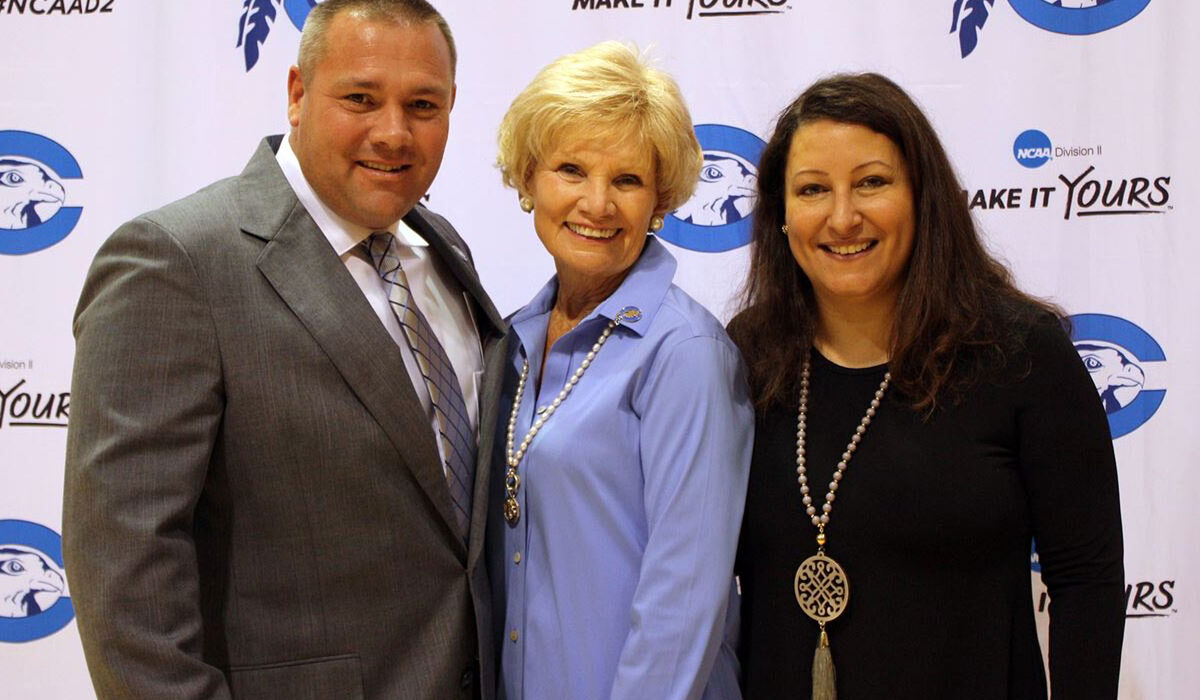 “This is a great moment in Chowan athletic history, with the legacy of the Burke name continuing here,” stated Vice President of Athletics Patrick Mashuda.  “I am excited to be a part of that history here and look forward to supporting Rob while he carves out his own name in coaching history here.”

Burke, a 1999 Chowan graduate, returns home, this time on the sidelines.  Burke played for his father, legendary Chowan head coach Bob Burke, from 1995-1999, where he ranks in the top-10 in Chowan’s Division III program history in three point field goals made, assists, and points.

“I am humbled and honored to be here today,” noted Rob Burke.  “It’s a great opportunity to continue to chase my dreams and chase something that I started a long time ago in this gym, when I didn’t even know I wanted to be a basketball coach.  This place, this gym, this community, this town, made me who I am.”

“I was blessed to have the opportunity to go out to Colorado College and work for Jeff Conarroe.  He has been an unbelievable blessing in my life, and I cannot thank him enough for that opportunity.”

Prior to coming back to Chowan, Burke was the assistant men’s basketball coach at Division III Colorado College for one season under Coach Conarroe.

“Chowan University absolutely hit a homerun in hiring Rob Burke,” said Coach Jeff Conarroe.  “In almost 20 years of college basketball, I have never come across a more energetic, passionate, positive and gritty human being.  We are losing a tremendous asset here at Colorado College, he is truly selfless and an unbelievable mentor and leader for young men.  While the legacy at Chowan University makes him a tremendous fit, Rob Burke is prepared and ready to be a successful head coach at any level or location.  I encourage the Chowan and Murfreesboro community to buy stock early, Rob is a stock you can believe in!”

Burke spent four seasons at UNC Wilmington climbing the ranks within the program starting as the director of basketball operations in 2017 before being promoted to assistant coach during the 2018-19 campaign, and later served as the interim head coach for the latter half of the 2019-20 season.  Burke would go 5-8 as the interim while helping Shykeim Phillips to an All-CAA Rookie Team selection.

Prior to arriving in Wilmington, Burke served as the director of basketball operations at Georgia Southern for two seasons where he helped groom Tookie Brown to be named Sun Belt Conference Freshman of the Year and subsequently go on to be GSU’s all-time leading scorer.

Burke would spend five seasons as an assistant coach at The Citadel, where he helped recruit a pair of 1,000 point scorers.

Before moving up the ranks in the Division I level, Burke spent six seasons (2004-10) at NJCAA Spartanburg Methodist, where he guided the Pioneers to a 112-67 overall record, averaging 19 wins a season.  Burke was named Region X Coach of the Year in 2008-09 and sent 32 players to Division I and II.

Burke was a four-year member of the then, Chowan College, where he ranks in the top-10 in program history in made three-point field goals and in assists.  Burke graduated from Chowan in 1999 with a bachelor’s degree in Sport Management and a minor in Business Administration.

He and his wife, Neily, have two daughters, Mina and Marissa.