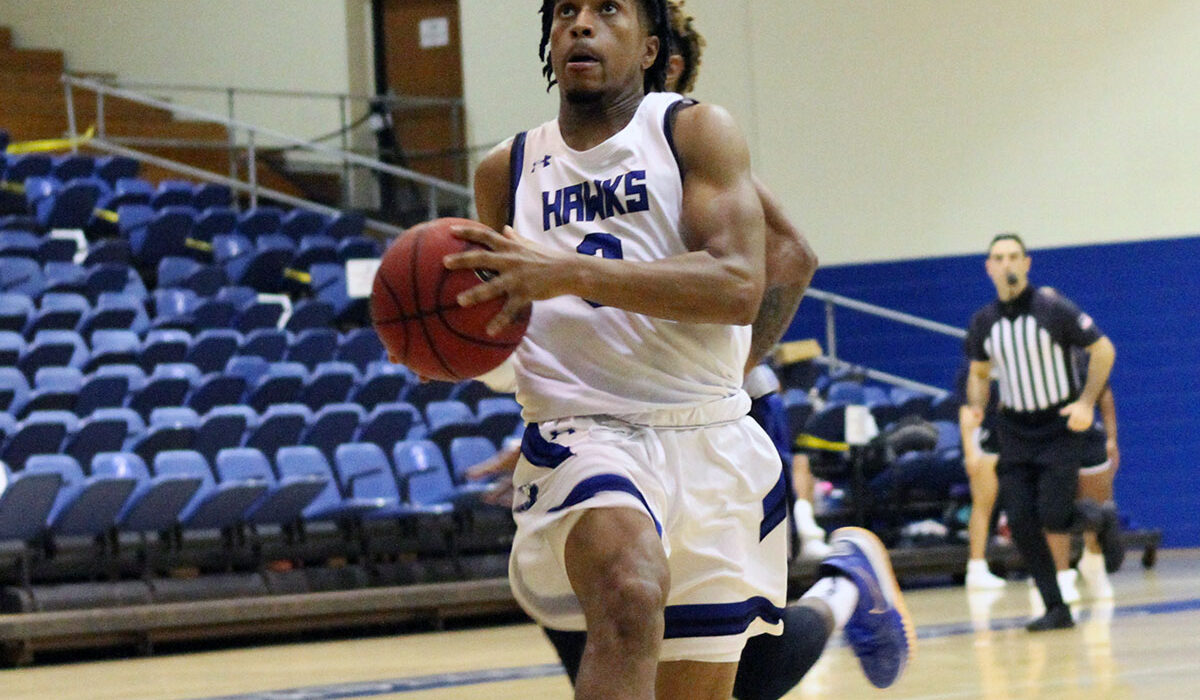 CENTRAL, S.C. – The Chowan Men’s Basketball was resilient in their revenge match against Southern Wesleyan fighting off multiple runs by the Warriors for a 79-75 victory in the Conference Carolinas Semifinals on Tuesday evening.

All-Conference selection, Jaedon Willis, paced the Hawks with 20 points including a crucial three-pointer and two free throws in the final minute.  Conference Defensive Player of the Year, Jonathan McFall, recorded a double-double with 16 points and 11 rebounds.

Conference Carolinas Defensive Player of the Year, Jonathan McFall, put the Hawks on the board first with a layup in transition after a steal.  Tahkey Williams connected from deep to offset the triple by the Warriors to lead 5-3.

After a free throw by SWU, Jonathan McFall knocked down a jumper from the elbow before Jaylen Dilliard scored his first bucket of the contest to give the Hawks a 9-4 lead.  Another pair of free throws by the Warriors were offset by a Jaedon Willis triple.  SWU scored the next seven points to take the lead 13-12.

Calvin Ahoume continued the scoring for the Hawks with a jumper and a dunk off assists from Jamal Thomas, 28-18.  Ahoume tallied another bucket to offset a Warrior basket to push the lead back to double-figures.

Elijah Hill knocked down a triple to slow the run but the Warriors answered.  Jonathan McFall evened the score with a dunk off an assist from Jamal Thomas.

The two teams were even at 37 going into the locker room.

Jonathan McFall scored six points for the Hawks as Southern Wesleyan would take a 50-43 lead at the media timeout.  McFall posted another bucket in the paint before Elijah Hill registered a driving layup to cut the deficit to 50-47.

Jaedon Willis tallied a jumper before the Warriors ended the three minute scoring drought with a bucket, 52-49.  Calvin Ahoume notched an offensive rebound and putback before a Willis three-point play handed the lead back to the Hawks, 54-52.

Jamal Thomas hit a jumper before a three-pointer from the corner trimmed the lead to one, 56-55.  Calvin Ahoume would pick up a point at the stripe before the Warriors evened up the score again, 57-all.  Elijah Hill hit a layup prior to SWU triple to push the lead back to the Warriors, 60-59.

SWU pushed their lead to 70-66 after a free throw at the media timeout, 3:48.  Jaylen Dilliard connected for a pair at the charity stripe.  Jaedon Willis notched a layup to offset a Warrior bucket to keep the contest within reach, 72-70, with 2:05 remaining.

With 1:37 remaining, Jamal Thomas evened the score with a driving layup.  SWU hit 1-2 from the line before Jaedon Willis connected from deep to give the Hawks a 75-73 advantage with less than a minute to play.

SWU missed a three-pointer with 34 seconds remaining as the Defensive Player of the Year, Jonathan McFall, forced the pressure.  The Warriors were forced to foul putting the Hawks at the line.  Chowan missed the one-and-one opportunity with 26.4 remaining.

Jaylen Dilliard swiped an errant pass and sent Dilliard to the line.  DIlliard hit both at the stripe to lead 77-73.  The Warriors would score a bucket with two seconds on the clock.  Jaedon Willis ices the contest at the stripe.