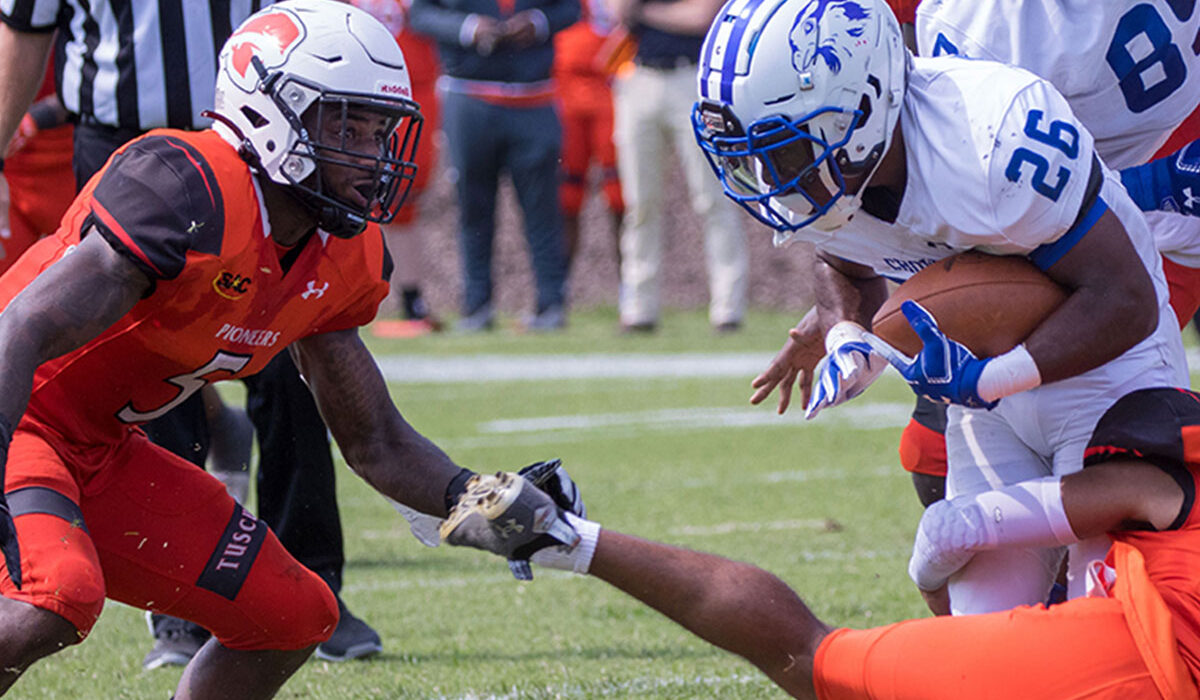 GREENEVILLE, Tenn. – Déjà vu for Chowan Football as the Hawks picked up a double overtime victory on the road against Tusculum on Saturday, 46-38.  The win marks the second straight win in overtime and the best start to a season since 1999.

Jude McAtamney would go 5-5 on PAT attempts and break the school record with a 47-yd field goal to end the first half.  It was the longest made field goal since 2014, when CIAA Specialist of the Year, Nick Hahula, made a 45-yd field goal against Bowie State.

Jaylon Boyd scored the go-ahead touchdown in double overtime for his lone score of the contest.  Tyrek McNeil tallied 55 yards on the ground and 25 yards receiving with two scores, including the touchdown in the first overtime.

Tusculum marched down the field quickly on a three-play 68 yard drive to go up 7-0 just 1:45 into the game.

Chowan would be forced to punt on their opening drive despite Malik Tobias picking up a 15 yard reception from Bryce Witt.

The Hawks defense held strong forcing the Pioneers to turn the ball over on downs near the redzone.  Chowan would strike as Bryce Witt found Samuel Dunn for a 60 yard reception on the second play to put the Hawks in the redzone.  Witt would call his own number on fourth-and-goal from the one to even the score at 7-all.

Both teams punted on their next drives.

Tusculum used the short field and a costly penalty by the Hawks on fourth down to take the lead 14-7.  The Hawks were called for roughing the passer on fourth down inside the redzone.

The Pioneers took a 21-7 lead after picking off a pass and returning it for a touchdown on the next possession.

Chowan countered with a seven play drive that found the endzone.  Bryce Witt found Malik Tobias for a 17 yard reception before finishing off the drive with a 22 yard pass to Imeek Watkins for the touchdown.

The Chowan defense forced a punt before handing the ball back on an interception.

Tusculum would turn that drive into points converting on a 26 yard field goal.  The Hawks would have 25 seconds to move the ball down the field before halftime.

Bryce Witt started the drive with a 21 yard rush that was aided by a penalty.  Jude McAtamney converted a 47 yard field goal as time expired in the half to trail 24-17.

The opening drive of the second half would stall for the Hawks near midfield as Chowan was unable to convert on fourth and short.

The defense was able to force a punt as Rafiq Abdul-Wahid picked up a sack.

Neither team was able to mount a fruitful drive in the quarter.

On the final drive of the third quarter, Bryce Witt picked up two completions to Imeek Watkins for 14 and 13 yards before finding Laurence King for a 32 yard strike to put the Hawks on the edge of the redzone.  The drive would stall as the quarter changed and the 36 yard field goal attempt missed wide right.

Following a defensive stop, Demetrius Moore found Laurence King on a trick play for the 51 yard touchdown pass to even the score at 24-all with 11:23 remaining.

Tusculum moved the ball down the field before four straight incomplete passes handed the ball back to the Hawks at their own 36.  Simeon Burns, Raydarius Freeman, and Rafiq Abdul-Wahid were credited with quarterback hurries.

Chowan used the momentum to take the lead 31-24 as Bryce Witt found Imeek Watkins for 16 yards prior to Tyrek McNeil taking off down the right sideline for a 39 yard touchdown.

The Pioneers mounted a long 11 play 80 yard drive to even the score at 31-all with less than a minute to play.  The Hawks were unable to move the ball much as Luis Orellana pinned the Pioneers at their own 15.

Tusculum would score on the opening drive of overtime on their second play.  Bryce Witt countered with a 25 yard touchdown strike on the first play for the touchdown.

With the momentum on the side of the Hawks, Bryce Witt connected with Laurence King for a first down.  Jaylon Boyd punched it in from one-yard out before King tossed the two-point conversion to Imeek Watkins to lead 46-38.

The defense stayed strong forcing a fumble and two penalties to move the Pioneers back.  Tusculum was able to get a chunk of the yardage back, back to the original spot on third down.  The Hawks forced an incomplete pass on fourth down to end the game.

Chowan returns home for the first time since November 2, 2019 as the Hawks face Erskine in a non-conference contest on September 18.  Kick-off is slated for 1 p.m.