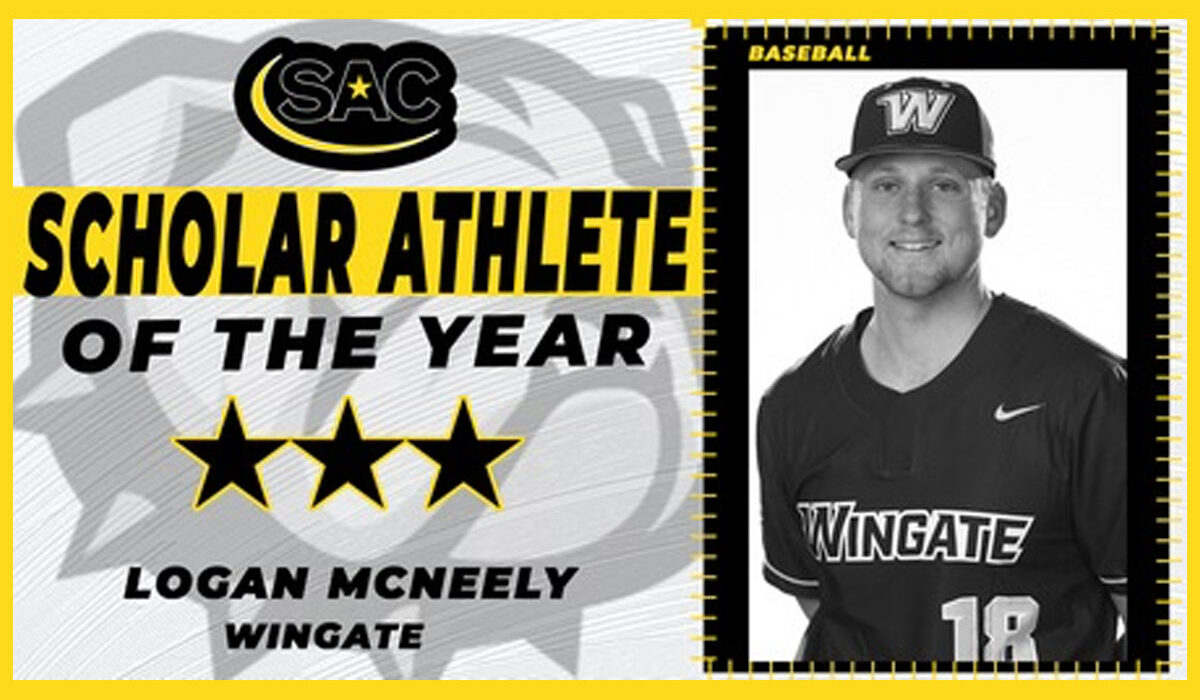 The South Atlantic Conference Scholar-Athlete of the Year award is presented annually to one student-athlete in each of the Conference’s championship sports, and is voted on by the SAC’s Faculty Athletic Representatives Committee. The winners are selected based on their achievements in academics, athletics, service, and leadership.

McNeely, a senior from Shelby, N.C., holds a 3.69 GPA while majoring in exercise science with a biology minor. He also completed a Master of Business Administration degree and has been accepted to the Wingate Doctor of Physical Therapy program. A two-time member of the Wingate President’s and Dean’s Lists, McNeely is also a four-time SAC Commissioner’s Honor Roll selection.

“I would like to congratulate Logan on being recognized as the SAC Scholar-Athlete,” said Wingate head baseball coach Jeff Gregory. “I believe that Logan is a great example that you can be successful in both the classroom and in the athletic arena. He has achieved at the highest of standards during his career. This award continues to support what he has accomplished over his time as a student-athlete at Wingate University. His commitment to both his academic and athletic career has been second to none. I am proud of him for having his hard work recognized and I know that everyone that has been around Logan is genuinely thrilled for him.”

A catcher for the Bulldogs, he was a two-time All-SAC selection and was a 2022 All-Defensive Team selection. He helped lead Wingate to the 2021 NCAA Division II National Championships and was named the National Championship Most Valuable Player. In 2022, he batted .363 with 10 doubles, five home runs, 43 RBIs, and 56 runs scored.

In addition to his success on the field and in the classroom, McNeely is a very active member of the Wingate and Shelby, N.C. communities. He volunteers to help serve meals to lower-income families in Shelby, while also serving as a volunteer at Carolina Panthers games and the American Legion World Series in Shelby working concessions stands. He served as an Anatomy and Physiology tutor at Wingate, is a member of the Physical Therapy Club, and has been with the Wingate baseball team at various camps and at Unionville Elementary School.